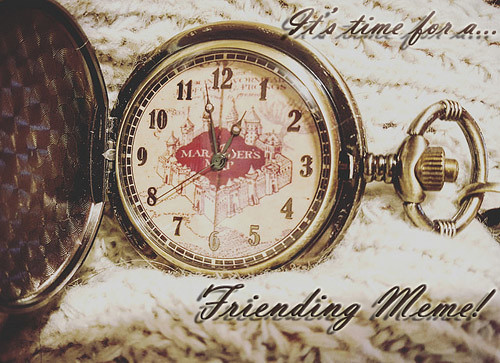 ((This comm doesn't look that active anymore, haha, but I'll give it a shot anyway, I guess...))

Name: Savannah
Age: 25
Location: Arizona, USA
What's in your journal: Not much, haha! My rp guidelines and ship preferences and that sort of thing. Also some of my fics. I mostly have my LJ to take part in fests and comms and stuff; I actually rarely post in my own journal...<.< >.>
What rating is your journal: Mature
Favourite HP character(s): Draco Malfoy, Blaise Zabini
Interests/Hobbies outside of fandom: I wasn't aware there was life outside of HP. What is this brand new world? (Haha, kidding. But not really. But yes...Anyway, my other interests mostly consist of yaoi manga/anime, video games, and theatre.)
Friending policy: Unless we tend to participate in the same fic fests/challenges and such (like, I see you around a lot), I'll want to chat a bit first before adding.
Hogwarts house: Slytherin
Familiar: Owl, toad or cat? Owl for sure.
Favourite Hogwarts class: Potions
Favourite pairing(s): RW/DM, BZ/DM, RW/BZ/DM, OW/DM, TL/DM (Those are just the big ones. I'm honestly down for anything m/m that doesn't involve Harry.)
What you do in fandom: Write fics and rp.
What you can offer to friends: I'm always open to fanfic requests! I'm happy to beta for anyone who asks, also.
How long you've been in fandom: Like, in the HP fandom in general? Pretty much since it came out, so I would've been, like...eight? Online? Well, I started rping and reading fanfiction in my early teens, but in all honesty, I didn't join the actual writing side of the community till this past March when I made this LJ account...I know, weird that it took me so long, but it is what it is, haha.
Other fandoms you like: 19 Days, Dangan Ronpa, One Punch Man
Other comms you like:

rp_me, among others!
Anything else you'd like to share: I recently started up my own prompt-based fest, which is currently gearing up for claiming this coming Saturday, 8/6. You can find more info at

potterstock. I'm also hoping to start up a purely request-based fanfic comm in the near future, where everyone can advertise themselves as writers and fulfill the requests for fics made by other members year 'round! (It will probably end up being called hp_your_way, after an rping comm I used to run on VF, but we'll see...) 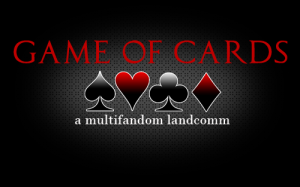 gameofcards - a multi-fandom, team based, challenge community
where you can participate in all sorts of writing challenges, games, memes, media challenges and other misc fun to earn points!

Name: frnklymrshnkly
Age: 26
Location: Toronto
What's in your journal: Random things usually related to feelings about fandom or academia, lately some recs--I'm getting more into that
Favourite HP character(s): Snape, Draco, Neville, Hermione, Pre-Tonks Remus
Interests/Hobbies outside of fandom: history, school, panel shows, Danish dramas, minimalism, meditation, healthy cooking and The Smiths (duh)
Friending policy: I love new friends
Hogwarts house: I believe the house system is divisive, but I am definitely a Hufflepuff
Familiar: Owl, toad or cat? Owl!
Favourite Hogwarts class: Most of them seem pretty useful to a wizard... Maybe potions though, cos I enjoy cooking.
Favourite pairing(s): Draco/Harry is probably 99% of what I read, but I also enjoy Remus/Sirius, Percy/Oliver and Pansy/Ginny, and, a couple of times per year, some Snape/(of-age) Harry
What you do in fandom: I read and comment ceaselessly, beta read, follow my favourite d/h fests and post recs
What you can offer to friends: I love beta reading, reading and posting in discussions related to fandom (especially meta stuff), and I genuinely enjoy reading about and commenting on RL stuff too
How long you've been in fandom: ~12 years. But I only stopped being a lurker like a year ago.
Other comms you like:

Name: That is under flock. Sorry...
Age: 30
Location: USA
What's in your journal: Fandom musings (Harry Potter, other fandoms and general), societal/everyday life musings, musings on social media and pop culture (I have a blog within a blog called "Shit My Facebook Says") and the occasional fun parody post. I have some RL, but it's not too RL heavy.
What rating is your journal: PG-13
Favourite HP character(s): Remus, Tonks, Hermione, Sirius, Neville, Luna.
Interests/Hobbies outside of fandom: History, writing, films.
Friending policy: Don't really have one?
Hogwarts house: Hufflepuff. I'm such a Hufflepuff.
Familiar: Owl, toad or cat? I'd say a cat, but owls seem most useful in the universe. Just saying.
Favourite Hogwarts class: Ideally History of Magic, but I hated instructors like Binns, who'd bore me even though I loved history! Perhaps Muggle Studies or Transfiguration. :)
Favourite pairing(s): Remus/Tonks (before DH), Ron/Hermione.
What you do in fandom: I write fanfic (mostly Harry Potter), discussion posts, and in the past I've done recaps and re-reads.
What you can offer to friends: I love commenting on discussion and introspective posts, I'm open to other opinions... not sure what else?
How long you've been in fandom: Fifteen years. I remember when ff.n had only 100 Harry Potter fanfics. I'm an oldbie who never left.
Other fandoms you like: Parks and Recreation, Buffy, Firefly, Mad Men.
Other comms you like: I run bsc_snark, and I sometimes read customers_suck and bad_service.
Anything else you'd like to share:

Name: Evan
Age: 23
Location: USA
What's in your journal: So far, just personal stuff and writing about writing. There will be hp fanfiction for sure, and possibly original fanfiction and other fandoms.
What rating is your journal: NC-17
Favourite HP character(s): All of them? Harry, Ron, Hermione, Severus, Lucius, Narcissa, Draco, Bellatrix, Luna...
Interests/Hobbies outside of fandom: Writing original fic, video games, movies (a lot of horror), reading. Sometimes I like to fool around in photoshop. I'm considering learning to code.
Friending policy: I just need some kind of contact before I friend back. Commenting here or on my lj would be perfect.
Hogwarts house: Slytherin
Familiar: Can I say rat, because of Ron? If not, owl.
Favourite Hogwarts class: Probably Care of Magical Creatures.
Favourite pairing(s): Lucius x Narcissa
What you do in fandom: Write. I'm trying to start reviewing/commenting too. I've done a couple of edits.
What you can offer to friends: I haven't been the best commenter in the past, but I'm working on it. Also I love to talk outside of lj. And if you want someone to read over/beta your fic, I'm totally willing.
How long you've been in fandom: Um... I started writing HP fanfic in 2004? I think? So 10 years of active participation online. I started going to Harry Potter release parties with Goblet of Fire (the book), though, which could count.
Other fandoms you like: A Song of Ice and Fire, Doctor Who (9 & 10)... I like a lot of stuff, but I don't always consider myself part of the fandom.
Other comms you like: Nothing I can name at the moment. On the lookout for new comms, though.
Anything else you'd like to share: This is a new journal, but I fully intend on staying for a long time.

digthewriter
Age: Old enough :D
Location: USA, New England
What's in your journal: Mostly my writing (some art)
What rating is your journal: Mature
Favourite HP character(s): Sirius Black
Interests/Hobbies outside of fandom: I host some social networking events. Travel. Listening to Audiobooks. Science Fiction.
Friending policy: I don't friend back if you have an empty journal, otherwise, I love friending new people and reading about their lives.
Hogwarts house: Ravenclaw
Familiar: Cat, probably
Favourite Hogwarts class: Arithmancy
Favourite pairing(s): Harry/Draco
What you do in fandom: Write and read and beta.
What you can offer to friends: My awesome personality? LOL
How long you've been in fandom: Not very long. I wrote my first fanfic 2 years ago & maybe started reading it 3 years ago.
Other fandoms you like: Merlin. Suits. White Collar. Teen Wolf.
Other comms you like:

hprarefest ♥ And I'll be running

kisslicknipsuck
Age: 23
Location: Ohio, US
What's in your journal: Mixture of fanfic and personal entries. Although, admittedly, I don't post very often. I've been trying to be better at updating my journal...
What rating is your journal: NC-17, mostly because of the fanfic^///^
Favourite HP character(s): Severus♥, Harry, Draco, Hermione, Luna, Remus
Interests/Hobbies outside of fandom: reading, tv/movies, arts and crafts (especially knitting and scrapbooking), music, video games (despite the fact that I'm terrible at actually finishing any:'D), and my boyfriend has recently gotten me into American comics
Friending policy: I don't really have a policy. I'll friend anyone who posts in English and seems to post new entries more than once a year. Honestly, even if we don't have a lot in common, I'll probably still accept your friend request. I like meeting new people:)
Hogwarts house: Slytherin. Always.
Familiar: Owl. There's just something about a large bird of prey that piques my interest. It might be because they're also called raptors, and that word makes one think of all kinds of awesome things, but whatever. Owls are cool.
Favourite Hogwarts class: Potions. I feel like I'd be good at Potions.
Favourite pairing(s): Snarry first and foremost. But also, Harry/Draco, Severus/Draco, Severus/Hermione, Harry/Draco/Severus, Harry/Hermione/Severus, Harry/Hermione, Remus/Harry, Harry/Luna, Draco/Hermione, Draco/Luna, Neville/Draco, James/Severus, Severus/Remus, and also a strange fondness for Charlie/Draco that I don't understand because I've never really cared one way or another about Charlie Weasley.
What you do in fandom: Mostly lurk, honestly, but I also write fic. I try to comment when I read fic. Occasionally, when I'm not too busy with college, I will participate in fests. I'm sad I missed

hd_owlpost this year:( I also beta sometimes.
What you can offer to friends: Unfortunately, not much:'D I post irregularly since I fall in and out of fandom because of college, and that generally effects my ability to read and comment on other peoples' posts. But I do try. I enjoy getting to know new people, so I like conversations when they arise. Also, again, I beta sometimes.
How long you've been in fandom: I don't even know anymore...
Other fandoms you like: Merlin, Sherlock, Doctor Who, The Walking Dead, Supernatural, Game of Thrones, Leverage, The Big Bang Theory...and others, but I don't really follow the fandoms--except for Merlin. I check Merlin every once in a while.
Other comms you like: snape_potter, hd_owlpost, hprarepairs, snarry100
Anything else you'd like to share: Let's all be friends!:D
Collapse